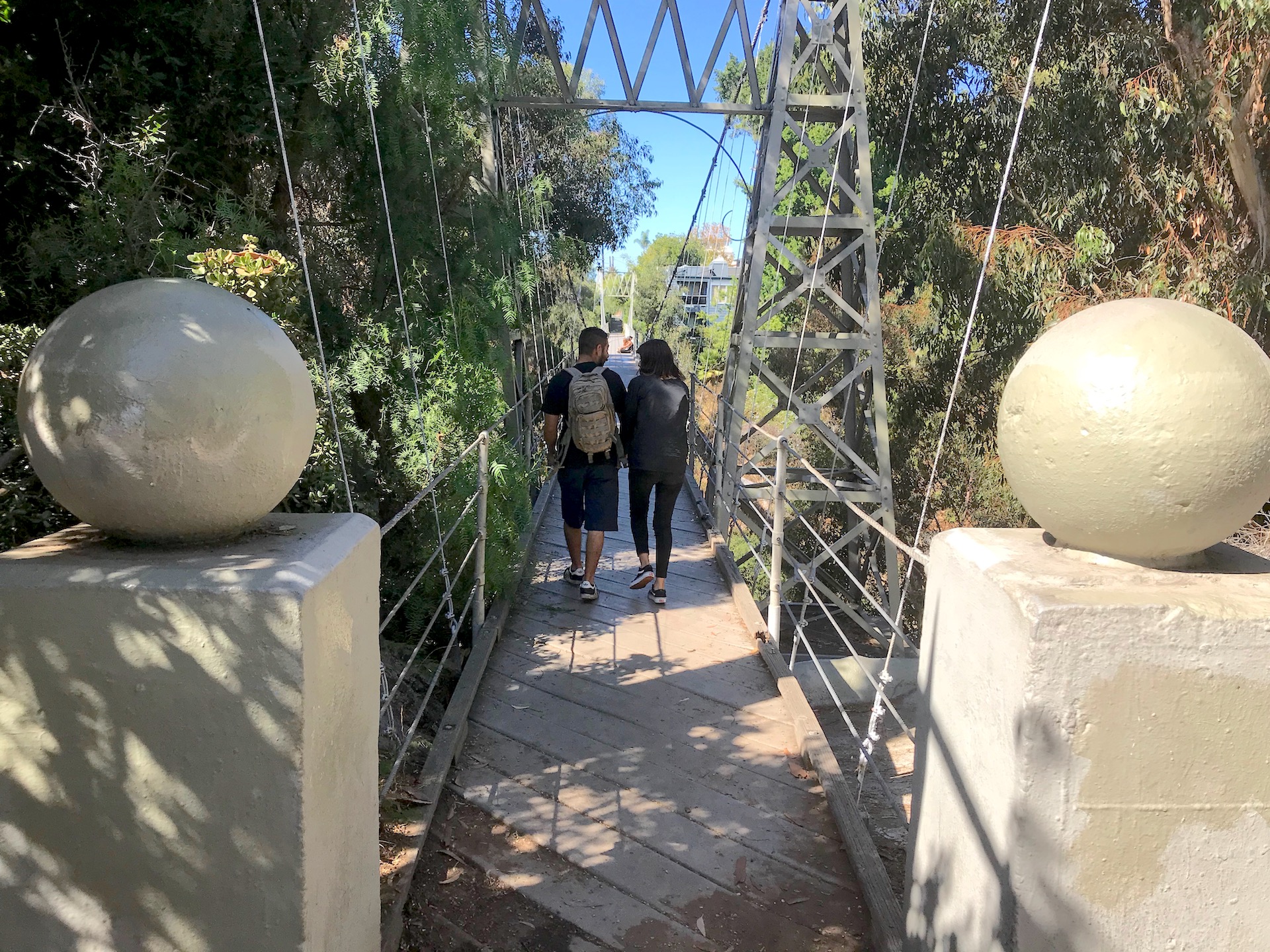 Explore two historic bridges on a walk that can be very romantic – the Quince Street trestle bridge and the Spruce Street suspension bridge – and they’re just a few blocks from each other.

The Quince Street bridge (1905) that spans Maple Canyon is one of the only remaining wooden trestle bridges in the city. The Spruce Street Suspension Bridge (1912) was appropriately named by kids as “The Wiggly Bridge.” It’s 375 feet long and hangs seventy feet above Kate Sessions Canyon, anchored by steel suspension cables that were redone in 2010 to meet earthquake standards.

Andy’s Advice: I recommend starting on Fourth Avenue and crossing the Trestle Bridge first and then walking up First Avenue to Spruce Street, where you’ll turn left and head toward the fun Suspension Bridge.  Once you’re on the suspension bridge, look to your left up over the treetops and you’ll see downtown San Diego.

After coming to the west end of the Spruce Street Suspension Bridge consider walking an extra city block starting up Curlew Street and back on Thorn Street. You’ll walk past some of the most beautiful homes in San Diego dating back to the early 1900’s.

Atmosphere:  This is a casual stroll between two bridges that are only blocks apart. You’ll walk through parts of Banker’s Hill and the southern reaches of Mission Hills (if you keep going once you cross the suspension bridge).  Spruce Street Suspension bridge spans Kate Sessions Canyon, a little oasis of trees and trails that may make you forget that downtown is only about a mile away.

Extra Credit: After exiting the west end of the suspension bride, walk further as shown on the map and keep your eyes open for a brass commemorative plaque and learn about what amazing thing happened at that very spot in 1897. (Hint: It’s located near the corner of Spruce and Thorn by the mansion pictured below.)

If you’re inspired to see the suspension bridges from the trail below (4th picture in gallery below) you can access the Kate Sessions Canyon trail from North Arroyo Dr. Use the first Google Map below to zero in on it. Likewise the Maple Canyon Trail starts on Maple Street and is much longer and ends up under the Quince Street trestle bridge.


Park along 4th Avenue where parking is free and is not metered. Park along 6th Avenue or just inside Balboa Park for more nearby free parking. Otherwise metered street parking on side streets near the Trestle bridge. 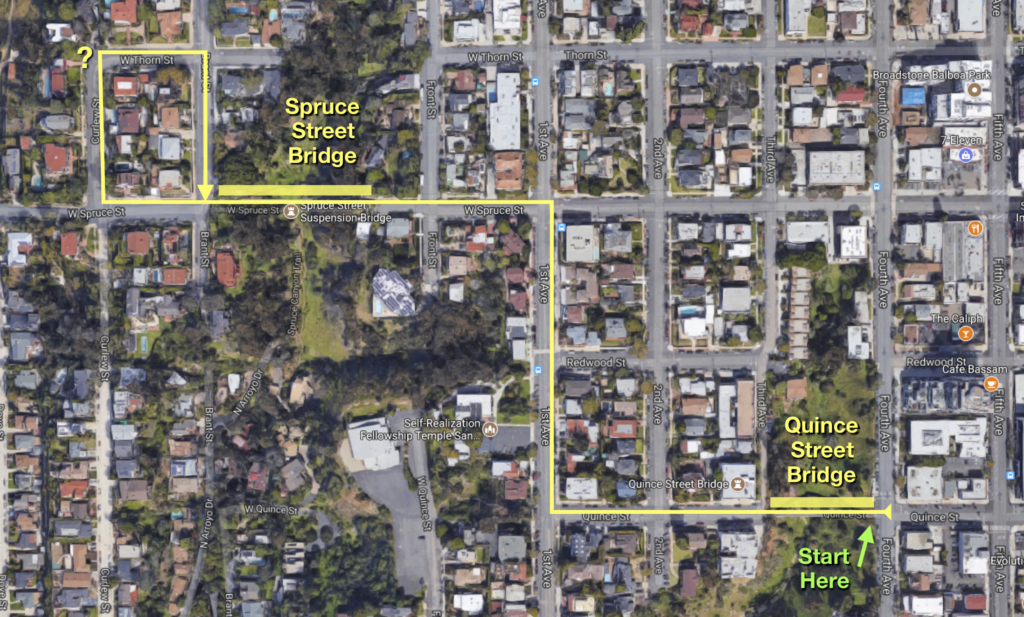 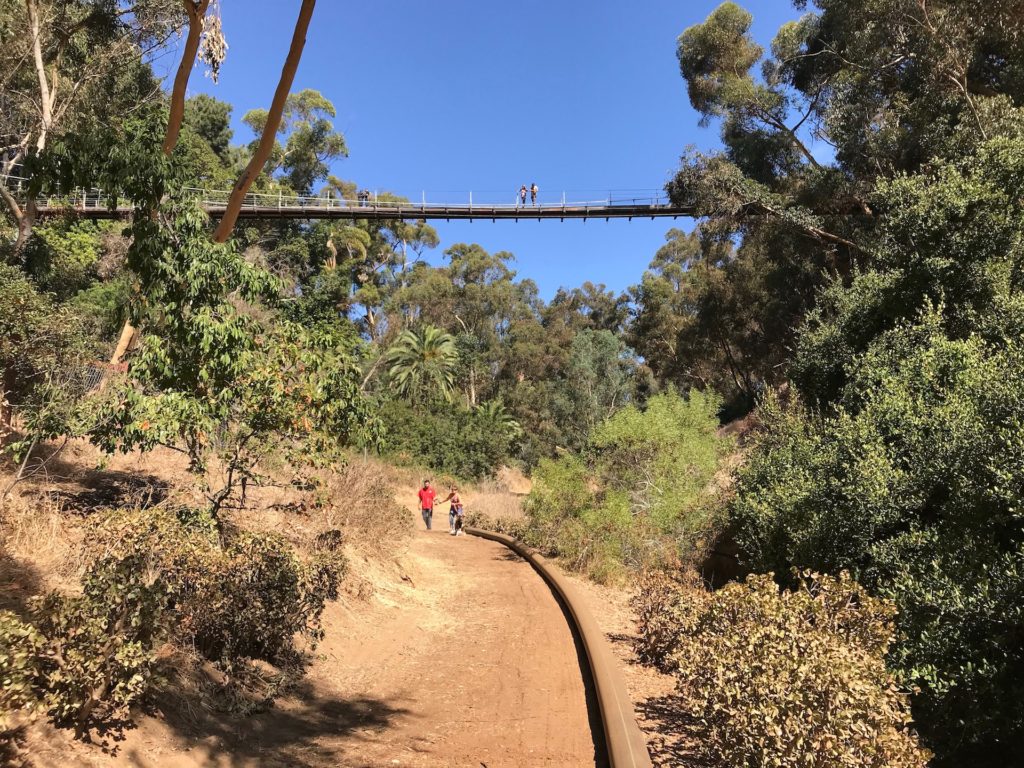 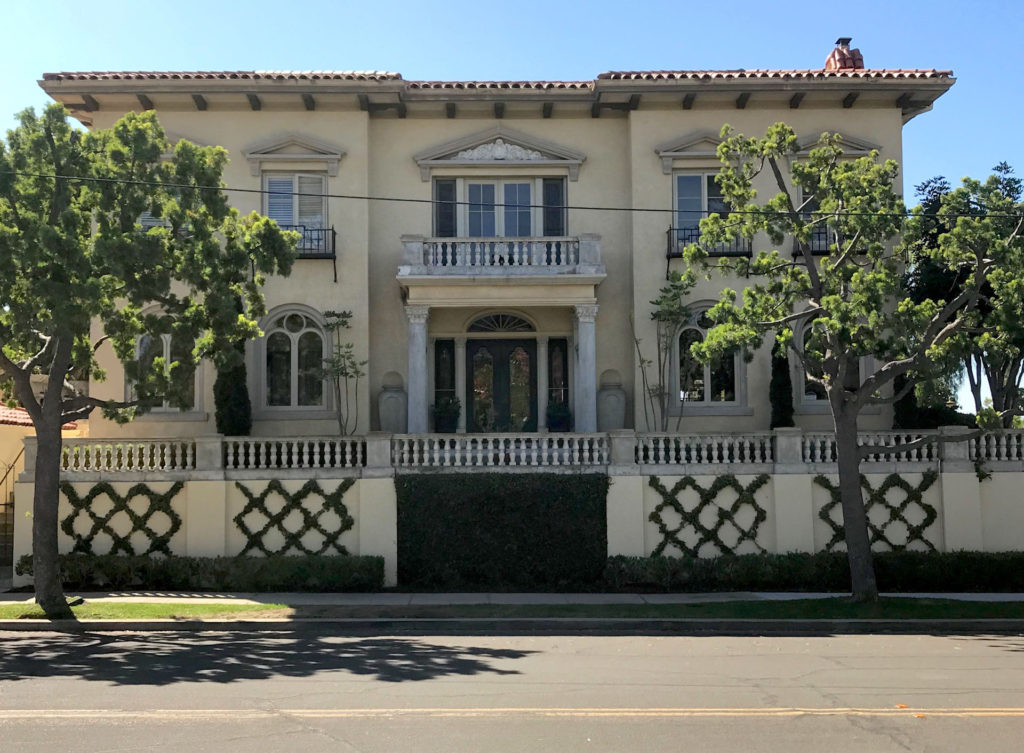